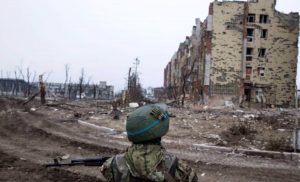 US Politicians Flip-Flop over Ukraine War Strategy | Democrat lawmakers call on President Biden to ‘engage in direct talks with Russia’ to end invasion only to withdraw it a day later.

A group of US Democrat lawmakers urged President Joe Biden to rethink his administration’s strategy in Ukraine war, writing in a letter on Monday that it is “America’s responsibility to pursue every diplomatic avenue” to reach a ceasefire.

The move can be understood that Democrats are anticipating significant losses in the upcoming Mid-Term Election that would result in the Democrats losing control of the House.

It is not certain if the call was to prevent a world catastrophe since the significant escalation of nuclear confrontation and rhetoric.  Nuclear preparedness training exercises were 1st conducted by NATO. Russia then responded with doing its own, while the grandstanding by both sides continued.

One day after issuing their letter urging President Biden to seek direct diplomatic talks with Russia, the 30 lawmakers withdrew that appeal.

The move reflects deepening divisions in the US politics over the conflict, and possibly a frenzy by Democrats to minimize the damage their party will suffer in the upcoming Mid-Term Elections.

Republican House Minority Leader Kevin McCarthy suggested that support for Ukraine may be scaled back if Republicans retake Congress.

“We agree with the Administration’s perspective that it is not America’s place to pressure Ukraine’s government regarding sovereign decisions, and with the principle you have enunciated that there should be ‘nothing about Ukraine without Ukraine,’” 30 Democratic lawmakers wrote in the letter.

“But as legislators responsible for the expenditure of tens of billions of U.S. taxpayer dollars in military assistance in the conflict, we believe such involvement in this war also creates a responsibility for the United States to seriously explore all possible avenues, including direct engagement with Russia, to reduce harm and support Ukraine in achieving a peaceful settlement.”

Is it Enough to Focus on Information Warfare as a Threat to Democracy? What are the Fundamentals of a Functioning Democracy? Are they Present or Missing in Western Democracies? | Survivability Podcast™

How Did a Single Internet Event Threaten Business Survivability and National…

Why is US Dominance over its European Allies Crumbling over Russia-Ukraine War? |…